I am busy “turning out” twelve new paintings for a show with Sara Zak, my favorite oil painter, and Chris Hawley, city planner and terrific instagram photographer. We three share a love for the places and architecture of Buffalo, our city. Our show is scheduled for Studio Hart on Allen Street in Buffalo, and will be called “Buffalo – a work in progress”. I won’t be posting these new paintings until the show is closer. It opens on January 9th, the second Friday which is being called the First Friday because of galleries taking time off the week after New Year’s.  Stay tuned.

In the meantime, another cool thing is happening.

I’ve been taking watercolor classes from Sally Treanor, a wonderful teacher and artist, since we met in a figure drawing class at the Buffalo Arts Studio back in 2002. Our daughters, Cynnie Gaasch and Margaret Frey, were both working at the BAS, and thought we, the mothers, would enjoy figure drawing. Sally asked me if I had every tried watercolors. No, I hadn’t. She was in her second session teaching watercolor at the BAS. I signed up, and have been painting with Sally ever since, twelve years in fact.

Doreen Boyer DeBoth is also a student of watercolor with Sally Treanor. She is best known for her oils, and for the gallery she operates at 447 Amherst Street in Buffalo, Artsphere Studio and Gallery. She and Sally are curating a show of watercolors by Sally’s students over the years.  It’s called “Hope Studio Watercolors: A seminar under the guidance of Sally Treanor.” It opens with a reception on Friday December 5th from 5 – 9 pm, and runs until January 3, 2015.

Sally continues to be an inspiration for me. I never would have tried watercolor if our daughters hadn’t put us together back in 2002. I love painting.  Since retiring from Architecture in 2010, I have been loving it more and more.

I have 5 paintings in this show. I’m posting them here. Hope you like them. They are all Buffalo inspired. 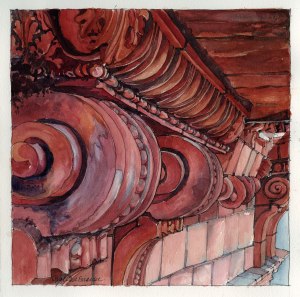